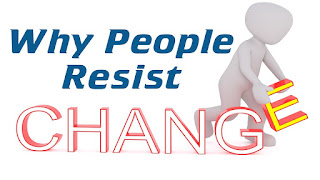 Change is not easy, either on a personal level or an organizational level.
People resist change for a number of reasons. I have placed these areas of
resistance into nine categories.
(1) Th e risk of change is seen as greater
than the risk of standing still. (2) People feel connected to what is
familiar. (3) People are missing the competencies to make the change.
(4) People are overwhelmed. (5) People believe the change is bad.
(6) Th ere are no models for change. (7) People want to make sure new
ideas are sound before they invest in them. (8) People are wary of hidden
agendas among the movers and shakers. (9) Th e change threatens their
identity and status.
The Risk of Change Is Seen As Greater Than the Risk
of Standing Still
Communicating a vision is not enough for most people. I have found that
the best way to combat resistance to change is to manage the risks. In the
United States, we seem to be initially moved by statistics. Get the people’s
attention fi rst by presenting the cold, hard facts. People will decide to buy
into the idea of change on an emotional level, once the rational requirements
have been met. Often, having plans for both low-risk or high-risk
change helps ease the transformation.
Change in an organization does not happen until the benefi t of moving
forward is viewed as greater than the benefi t of standing still, and the
disadvantages of the status quo are greater than change.
People Feel Connected to What Is Familiar
Organizations moving toward cultural change must not forget the history
of the company. Leaders need to recognize that if change is going
to take place, the past—how things have “always” been done—must be honored. By honoring the contributions of those who brought success
to the organization in the past, a leader shows diplomacy and respect for
the past stakeholders, as well as the loyal employees who have devoted
their lives to the company. People are social beings and loyal to what is
familiar. As a leader, it is important not to make people feel like they will
be betraying someone or something if they embrace the change. I have
also often witnessed people remaining in the same rotten job, situation, or
relationship, because it is easier to remain with the familiar than to exert
energy to make a change.
People Are Missing the Competencies to Make the Change
Sadly enough, many people will not change, because they do not believe
they are competent enough to change. No one will actually say this, however.
Th ey will just think it. So, problems with organizational change are
aff ected by self-esteem issues of their employees. In some cases, a lack of
competence is a real problem for an individual, but in most cases incorporating
eff ective communication and an eff ective training program is
all that is needed. Th ere are techniques to developing inventive thinking,
which then lead to problem solving in industry. If organizations
do not commit to investing in “thinking training,” the development
of these skill sets, and in innovation coaching, change is not likely to
occur.
In my industrial experience, when an organization made the
change from analog to digital (physically laying out the paper by hand
to using computers), many people had to be retrained to do the very
job they were initially hired to do many years ago. Some retired. Some
quit. Some hung in there and got retrained. If a person does not have
the competencies to make the change or does not want to commit to
retraining, then it is best for him or her to make a change to a new
organization.
People Are Overwhelmed
Change often produces fear and even anger in people and consequently
causes them to feel fatigued and overwhelmed. Apathy comes with being overwhelmed by too much too quickly. Fatigue prevents people
from implementing change, even if they believe in the new idea. People
who have to live with change feel fatigued when they do not feel valued.
Rewarding employees during this stressful transition, and off ering a
way of venting concerns without getting bogged down with negativity, is
important in addressing resistance to change.
People Believe the Change Is Bad
Skeptics are valuable, because their voices may result in vetting a process
or idea and making it better. Often when people resist change, it
is good, because it can act as a devil’s advocate in determining the best
solutions. Invite the skeptic in the process. Do not ignore people or
devalue them when they have objections to change. To do so is disrespectful
and may increase resistance to change. Many of the objections
may be rational and not emotional. Hmmm. Maybe you could be
wrong…
I have witnessed times when a great idea for change was not received
well, because the decision-makers did not have all the information to
make a sound decision. Sometimes when people believe that the change
is a bad idea, they are correct. When I worked in industry, I remember
going through too much change too often. Before one calendar year was
over, which was before the change could be evaluated for its eff ectiveness,
another major shift in the process took place. Th en a year later…
another major change. Th is confuses people and makes them weary.
Th ere is no benefi t in implementing change for change’s sake. It is a
bad idea.
Responsive Ad Here
Tags: best country, Best Ideas